A Boeing 777 plane was forced to make an emergency landing en route from Jeddah, in Saudi Arabia, to New York’s JFK airport when it was forced to divert to London, yesterday, June 15, when a woman went into labour. 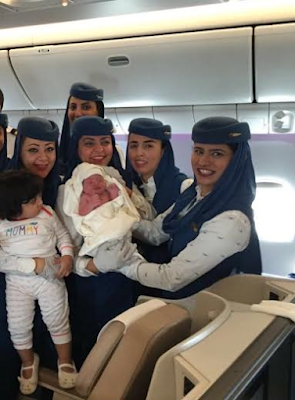 The pilots of the Saudi Arabian Airlines plane declared an emergency while flying over Northern Ireland, the Mail Online reported.

Flight tracking radar shows that an emergency was declared while the plane was flying over Northern Ireland. The flight tracking website Air Live reported at 10:47 BST that “a woman is giving birth” on board flight SV21.
It had traveled over northern England before flying over Northern Ireland. However, it turned around over Ireland and started travelling towards Wales.

Pictures of the cabin crew holding the baby have gone viral on social media and have been widely shared. The mother and baby were taken to hospital following the birth. 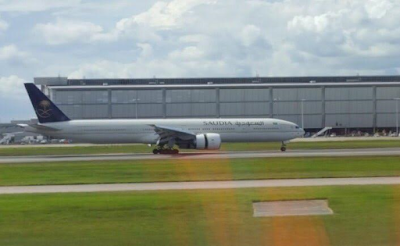 A Saudi Arabian Airlines officer confirmed the mid-flight birth, saying that “a happy event forced the Jeddah-New York plane to land in London”.

Abdul Rahman Al Fahad said that the passenger was in her seventh month and had a report that allowed her to board the plane.

“Both the mother and the baby girl are doing fine,” Al Fahad said, quoted by Saudi daily Okaz on Thursday, June 16.