Uche Jombo gave her 2 cents on the recent Gender equality bill on a post she made on her IG page today. 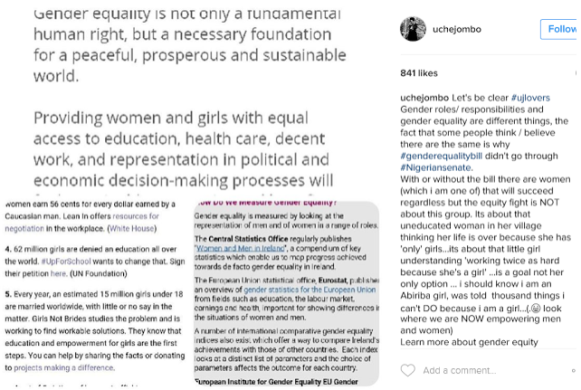 Let’s be clear #ujlovers. Gender roles/ responsibilities and gender equality are different things, the fact that some people think / believe there are the same is why#genderequalitybill didn’t go through #Nigeriansenate.

With or without the bill there are women (which i am one of) that will succeed regardless but the equity fight is NOT about this group. Its about that uneducated woman in her village thinking her life is over because she has ‘only’ girls…its about that little girl understanding ‘working twice as hard because she’s a girl’ …is a goal not her only option … i should know i am an Abiriba girl, was told  thousand things i can’t DO because i am a girl…(.😆 look where we are NOW empowering men and women)

Learn more about gender equity guidelines for free online.💖 FYI let’s not mistake gender roles for gender equality. I believe she was clearly talking about roles / responsibilities as a woman hence my repost about learning the right meaning of Gender equality.