Turkish President Recep Tayyip Erdogan has called on Muslims to reject contraception & have more children. Reuters cited Erdogan as saying in a live-broadcast speech in Istanbul on Monday, May 30.

“We will multiply our descendants. They talk about population planning, birth control. No Muslim family can have such approach. Nobody can interfere in God’s work. The first duty here belongs to mothers. 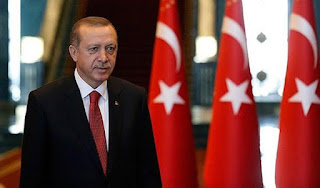 Mr Erdogan became president in August 2014 after serving as prime minister for 12 years. His AK Party has its roots in Islamism and many of its supporters are conservative Muslims.

In his speech, the Turkish leader placed the onus on women, particularly on “well-educated future mothers”, to not use birth control and to ensure the continued growth of Turkey’s population.
Mr Erdogan himself is a father of four. He has previously spoken out against contraception, describing it as “treason” when speaking at a wedding ceremony in 2015 as a witness.
“For years they committed the treason of birth control in this country, seeking to dry uo our bloodline. Lineage is very important both economically and spiritually,”

He also believes any couple should have at least three children to boost the Turkish population.