Paul Hayward, who is a cancer sufferer and is the Chief sports writer of Daily Telegraph UK has revealed how Lionel Messi gave him a signed Barcelona Jersey after he wrote a beautiful piece in November 2015 titled “How the genius of Lionel Messi and Dan Carter gave me hope in fighting cancer” 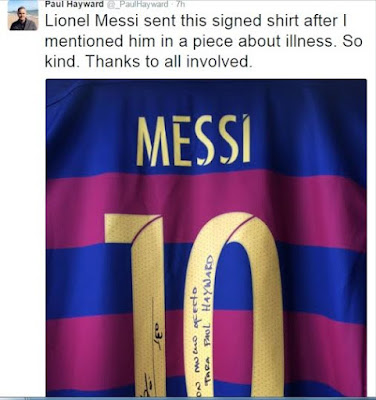 He tweeted a picture of Lionel Messi’s signed Jersey and wrote ‘Lionel Messi sent this signed shirt after I mentioned him in a piece about illness. So kind. Thanks to all involved.’

Below are excerpts of his article on Lionel Messi that prompted the kind gesture.

“Then came the sharpest ray of light. Barcelona v Bayern Munich at Camp Nou, in May. On the screen in a room short on cheer, Lionel Messi collected a pass on his left foot, turned inside then out in an impossibly narrow channel and sent Jerome Boateng, the Bayern defender, falling sideways like a felled tree. Out came Manuel Neuer, the world’s best goalkeeper, to quash the threat with a giant, raised arm. And Messi chipped him. Chipped one of the biggest and most intimidating men in football.

“As the ball bounced into the net Rafinha, another Bayern defender, went with it, his body a tangle of thwarted desperation. The camera panned round the crowd to capture the sense of wonder. A man in an Argentina shirt and Barcelona scarf was having a religious experience. On the commentary, Martin Tyler said: “Only football can make you feel like this.” I felt myself rise from my chair, and illness fell away.

“That moment will not leave my memory, because it made the world feel full of possibilities again. And to think: philosophers have searched for uplifting human truths in the most complex of areas, yet here was a dink from the boot of Lionel Messi casting light across the world.