by Harmcleff
in Sports
0
0
SHARES
Share on FacebookShare on Twitter
English champions Leicester City are set to break their record transfer fee for the second time in a matter of days by buying Nigerian international attacking midfielder Ahmed Musa, his agent told the BBC on Monday. 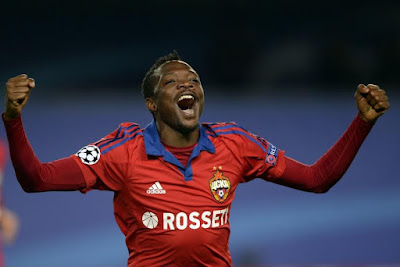 The 23-year-old, who scored a brace for Nigeria in a 3-2 defeat of Lionel Messi’s Argentina at the 2014 World Cup, will see his present side Russian outfit CSKA Moscow receive £16.6 million (S$29.7 million) – a record outlay for Leicester.
“Everything has been finalised and Musa will be in England for his medical on Wednesday,” Musa’s agent Tony Harris told BBC Sport.
Musa’s soon to be former coach Leonid Slutsky said the Nigerian – who scored 53 goals in 161 matches for CSKA since joining them in 2012 – would be ideal for the Premier League.
“If you look at the way things are done over there you’ll see he is a player just made for English football,” Slutsky said.
According to the BBC, Musa rejected the advances of Leicester’s rivals Southampton, Everton and West Ham.