Young Nigerian player Samuel Chukwueze is set to snub Arsenal to join Portuguese club FC Porto. Chukwueze and fellow Nigeria Under-17 starlet Kelechi Nwakali were pictured with Arsene Wenger and former Gunners star Nwankwo Kanu ahead of the pair finalising long-term deals with the club which has fallen through but Porto is set to sign the talented Samuel Chukwueze according to a report by Sun UK. 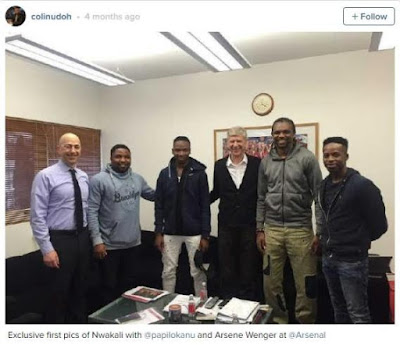 ‘It appears a deal has now fallen through for Chukwueze and that the youngster will instead commit his future to Porto.
‘Chukwueze’s Nigerian club Diamond Academy haggled with the Gunners over a fee for him as Wenger and the club grew frustrated at a lack of movement over a deal which would have seen the youngster bank £7,000 a month.’
‘But days ago the deal appeared to have collapsed over Diamond Academy’s desire the net more cash for him with the player now reportedly having grown tired of the deal dragging on.’
‘He had the choice of two of Europe’s finest finishing schools and turned down a move to French club Monaco in favour of a move to Portugal.
President of Diamond Academy Martin Apugo said: “Chukwueze is going to FC Porto not Monaco.’
“They are waiting for him to sign the papers but he couldn’t travel because he is with the Flying Eagles.
“We don’t know the length of contract he will sign until we get to Portugal.”