The Phnom Penh Municipal Court Cambodia, yesterday, June 7, heard the case of a self-described Nigerian footballer allegedly arrested with 100 grams of methamphetamine in the capital’s Choam Chao commune in January. During the short hearing, the 30-year-old Nigerian national Francis Ihenwe Oderah, confessed to having acted as a delivery man, but asked the court for clemency as he was not a dealer himself. 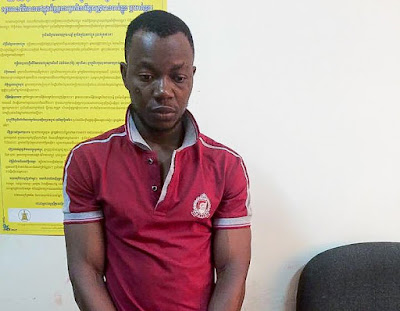 “A woman called me to receive the drugs from a motodop and then bring those drugs to customers, promising to give me $50. When I got the drugs, I brought them to her customers near a petrol station in Choam Chao and the police arrested me,”

Oderah said in a statement to police, which was read aloud in court and confirmed by Oderah himself. Oderah said he knew the woman only over the phone, and had been put in touch with her by a Nigerian friend.

A test of the 100 grams of meth, the results of which were also read in court, showed they had a purity of about 72 per cent.

He asked the court to release him, saying “I know I was wrong to break the law”.

A verdict is due on July