An early headed goal in the 7th minute by Bassem Morsy earned Zamalek a 1-0 win in Nigeria over Enyimba, who scored 10 goals in three home matches during qualifying. Both teams battled to pass accurately on a pitch soaked by rain in the southern city of Port Harcourt. 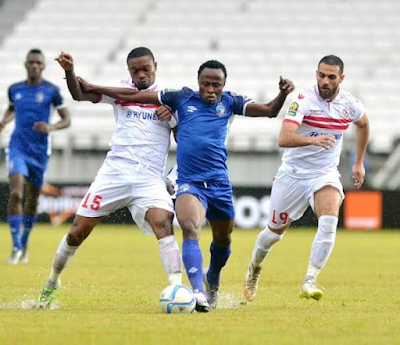 Enyimba tried to equalize through efforts from Joseph Osadiaye’s  and new signing Ifeanyi Onuigbo, but the water logged pitch didn’t help their cause.
Enyimba will now travel to Egypt for the second leg on on June 29.

“It’s a shame that we couldn’t win the game, but there is still much to play for as we still have five games to play in the group,” Aigbogun, head coach of Enyimba told Completesportsnigeria.

“The next game against Mamelodi Sundowns is very important and we must do everything we can to ensure we don’t lose against them. I have confidence in my players and I strongly believe we will make it to the last four.”