Leicester city and England striker Jamie Vardy has snubbed a move to Arsenal and will remain with EPL champions Leicester City according to Arsenal coach Arsene Wenger. In an interview with Chinese television, the Arsenal manager said: 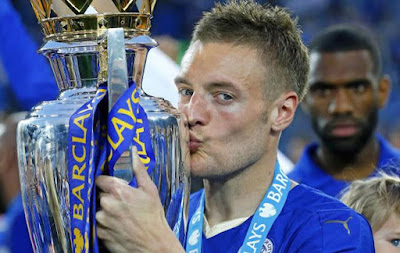 “Jamie Vardy is, at the moment, at Leicester and from what I know, he will stay at Leicester.”

The 29-year-old Vardy was a vital member of The Foxes’ title-winning squad, having scored 24 goals over the course of the 2015/16 Premier League campaign, just one fewer than top scorer Harry Kane. He also broke former Manchester United and Real Madrid forward Ruud van Nistelrooy’s record of scoring in 10 consecutive Premier League matches.

The London club, Arsenal, were prepared to offer Leicester the 25.4 million euros stated in his release clause and to pay the player a salary of 152,000 euros per week.

However, the BBC reports that Vardy has turned down the chance to move to the Emirates and will instead extend his contract with the Premier League champions until 2020, with the new deal earning him 127,000 euros per week.