World No 2 Andy Murray says that Tennis star Maria Sharapova had no excuse for taking a banned substance and says she is responsible for whatever medication she takes not her doctor or management.He made his comment after he advanced to the second round at Queen’s with a two-set win over Nicolas Mahut, just hours after Maria Sharapova announced her appeal against the two-year ban handed to her a week ago. 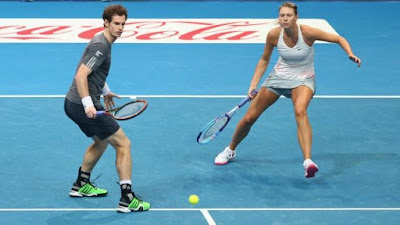 “My thoughts haven’t changed really from March [when he condemned the Russian for failing a drug test at the Australian Open]. I spoke quite a lot about it then.’ said Murray in quotes gotten from the Guardian UK.
“I do feel like if you’re cheating and are caught, and you are gaining advantage on your opponents, then you have to be punished for that. It’s not what’s fair or not, in terms of time. That’s up to the governing bodies, the courts and stuff and the lawyers, to decide. But my view hasn’t changed since March at all.”
“I don’t really see that as being a valid excuse. If you’re taking any medication, it’s your responsibility as the athlete to check and make sure what you’re taking is legal. There can be the odd case where, if you were given something by a doctor, he tells you, “Oh, this is, I don’t know, a vitamin’, and it’s not, then that’s different. But if you’re taking medication, there is absolutely no reason why you shouldn’t know whether it’s on the banned list or not.”
He said he would not entrust ask his management to monitor what he took, either – as Sharapova has done with her agent, Max Eisenbud, who claimed he did not alert the player to a warning about the banned drug meldonium because he was holidaying and did not see the emails from the International Tennis Federation.
“No, Dr Turner, who works at the LTA [would inspect any drug he took]. I only take an anti-inflammatory now and then if I’m having problems with my back or my hips. But he would be the guy I would speak to about that, for sure.”

One response to “Sport News: Andy Murray says Maria Sharapova had no ‘valid excuse’ for failing test hours after she launched appeal against suspension”