Oscar Pistorius has admitted he deserves a long jail sentence for killing Reeva Steenkamp but vehemently denied he murdered her, insisting that the 2013 shooting was not premeditated. In his first TV interview since Reeva’s death, Pistorius said he “couldn’t disagree” with those who felt he should be punished. 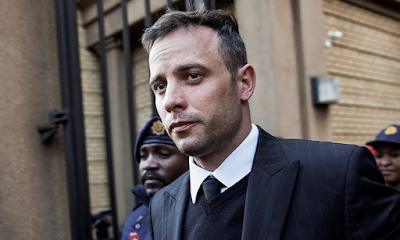 “At times I don’t feel like I should have the right to live for taking someone else’s life. What’s difficult is dealing with the charge of murder,” he said.

But Pistorius said he did not want to “waste my life” behind bars.

“If I was afforded the opportunity of redemption I would like to help the less fortunate like I had in my past,” he said. “I would like to believe that if Reeva could look down upon me that she would want me to live that life.”

Pistorius made the comments during an interview with ITV, to be broadcast at 9pm on Friday. The interview – at times frank, at other points self-exculpatory, and with moments of prolonged sobbing and even howling – comes days before a South African judge will sentence Pistorius for murder.

He was convicted in 2014 of manslaughter, but last year the conviction was upgraded to murder following an appeal by state prosecutors. The minimum sentence for murder in South Africa is 15 years. However, legal experts say judge Thokozile Masipa has considerable powers of discretion.

In the interview, Pistorius – who made his name as an Olympic and Paralympic athlete, reaching the 400m semi-finals of London 2012 – stuck to the same account he has given of the shooting of Steenkamp on 14 February 2013, Valentine’s Day, inside his gated home in Pretoria. He said Steenkamp’s death was a tragic accident caused by his sincere belief that an intruder was breaking into the apartment.

Pistorius said he arrived home just after 6pm to find Reeva “smiling and giddy and just bubbly”. She had cooked a romantic meal and laid the table with a candle. After, they lay down on the bed and chatted, he said, adding that “when I came in the room I placed my firearm on the left hand side of the bed”.

The athlete said he took his prosthetic legs off and fell asleep. It was “pitch dark”. At 3am he woke.

“I heard this noise coming from the bathroom,” he said. “It was a sliding noise of the window frame hitting the frame.”

He claimed he immediately got panicked and believed that “someone was actually in the process of breaking in, possibly with a ladder.
The athlete said he scooped up his firearm and, believing Steenkamp was still in the room, whispered to her to get down and ring the police. He said he was terrified as he walked toward the bathroom on his stumps, gun in hand.

“All of a sudden I heard a noise, at the toilet. I presumed it was the toilet door opening and before I know it I’d fired four shots.”

Prosecutors have dismissed Pistorius’s account as lies. They say the athlete murdered Steenkamp after a row prompted by his jealousy over an ex-boyfriend. They say she fled to the bathroom and barricaded herself in the toilet, pursued by Pistorius who first tried to smash the door down with a cricket bat and then returned with his 9mm weapon, firing into the door from point-blank range.

Pistorius said he felt a moment of horror when he realised Steenkamp was not in the bed but then experienced a short-lived “sense of calm”, thinking that she was hiding on the floor. He got down on the floor, however, and realised he still couldn’t feel her.

Pistorius said he looped back to the bathroom, and broke down the door to to the toilet with a cricket bat, ripping out one plank. Inside, he found Steenkamp slumped on the toilet. She was dead. There was blood everywhere, he said.
He said he put her on the bathroom floor, placing a towel under her head. “I just see blood and it’s just blood everywhere … So much blood! I try and pick her up. I’m trying to pick her up but there’s so much blood I can’t stand up.

“And I thought Reeva had started breathing, so I had my fingers in her mouth and I was trying to give her mouth to mouth, but there was so much blood.”

Pistorius told ITV he “saw the pain” he had caused and said that most of his mutual friends with Steenkamp “don’t speak to me any more”. One woman had spotted him shopping in Pretoria and had screamed at the store for allowing him in. He put down his basket and left, he said.

He denied some of the allegations levelled against him, including that he had behaved violently to Steenkamp before he shot her, hitting her with a cricket bat, and that he had taken steroids. Asked whether he was violent towards women, he said: “No, not at all.”

The athlete said he owned nine to 11 firearms, and had ordered a semi-automatic assault rifle, but added that he kept only his 9mm gun at home. Asked why he needed such an arsenal, Pistorius said that like all South Africans he had direct and traumatic personal experience of violent crime.

He said when he was growing up his father had been hijacked and beaten, and his brother hijacked, while a cousin who lived nearby was robbed at home in the middle of the day.

“I don’t know anybody in South Africa that hasn’t experienced some form of crime.” The dark consequence was “you get this fear … It’s just the reality we live in.”