The Prime Minister of Cambodia, Hun Sen, has been fined by the traffic police for not wearing a helmet during a motorbike ride even after apologizing publicly for the mistake. He is pictured above with the motorcycle rider. 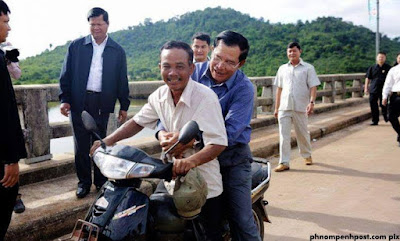 The fine worth 15,000 riel, approximately $3.75 was issued in a traffic ticket to the rider as well for violating article 6 of the traffic law.

The Prime Minister has accepted to pay his own fine and that of the motorbike owner. He further added that the parliamentary immunity does not pardon political office holders from breaking traffic laws.

“I appreciate Koh Kong province’s Sre Ampel district police who enforce the law without discrimination and without fear of the powerful people including the prime minister,” he said