Photo/video: Woman claimed she was assaulted by nightclub bouncer but that’s not what happened

by Heywhy
in Foreign News, News
1
0
SHARES
Share on FacebookShare on Twitter
CCTV footage has exposed what really happened after a 20 year old woman in Manchester reported to police officers that she had been assaulted by a club bouncer so as to put the bouncer in trouble. The woman had wanted to take a table outside into the smoking area in the early hours of Saturday morning when the bouncer took her arm and guided her back inside. 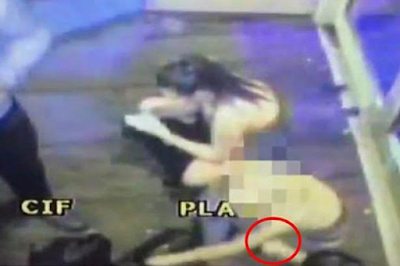 The woman started arguing with the bouncer and after the bouncer refused to give in, she asked her friend to punch her in the arm and then reported to the police that she had been assaulted by the bouncer. The police on seeing her body evidence then watched cctv footage and were shocked at the findings.
City centre inspector Phil Spurgeon said:

“Officers were approached by a 20-year-old woman on Deansgate Locks in the early hours of Saturday 25 June. She showed officers some redness and swelling to her upper arm, which she claimed had been caused by a door supervisor from a nearby bar.” “Officers took details of the woman and door supervisor and made arrangements to view CCTV the following evening,” he continued.

“The female then attended the Town Hall police station on Wednesday and insisted that she had been assaulted. She was then shown the CCTV and issued a fixed penalty notice for wasting police time “The decision to issue a fixed penalty notice rather than prosecute, reflected the limited time that officers spent on the investigation. Officers also took the door supervisors’ views into account.” Police have charged her £90 for wasting their time.