In the end, Cristiano Ronaldo had his winner’s medal, even if it was not the way the great showman had intended. Portugal, the team that finished third in their group, had found a way even on a night when their greatest player left the pitch on a stretcher. The players of France were on their knees and, on the far touchline, Ronaldo could be seen trying to make sense of an extraordinary story and take in all the contrasting emotions. 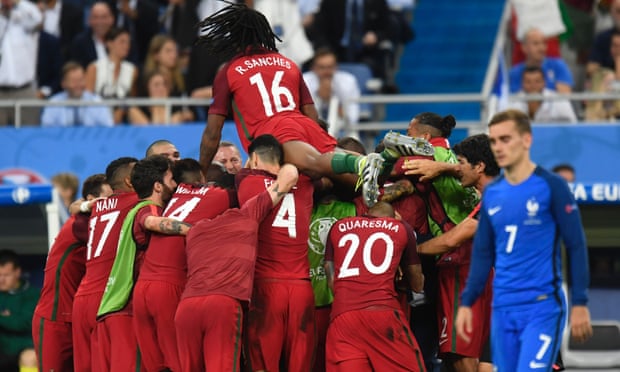 Ronaldo’s damaged knee might have been a grievous setback but Portugal refused to let it be the decisive factor. They gave everything to keep out France during those long passages when they were put under pressure and, ultimately, Éder’s decisive goal in the second period of extra time won a test of endurance. Their run of 10 successive defeats to France, stretching back to 1975, is over and they can reflect on the greatest achievement in the history of their national team. Their tactics will not appeal to everyone but nobody could possibly dispute their toughness to cope after the jarring challenge that meant their three-time Ballon d’Or winner could play only a bit-part role in the glory.

The problem with Ronaldo sometimes is that his occasional histrionics makes it difficult to know whether he is suffering from faux pain. This time, however, it was quickly apparent he was in trouble. Dimitri Payet’s right kneecap had followed through, at speed, into the side of Ronaldo’s left leg, bending the joint with the force of the impact. Portugal’s medical staff doused the area with magic spray but there was not a single moment from that point onwards when Ronaldo looked pain-free. His body language had sunk. He was unable to run with any freedom and nine minutes later he was down again, signalling for help, and eventually taken off for another round of treatment by the side of the pitch.

Had it been any other player he would have been taken off straight away.

This being Ronaldo, there was a desperate attempt to see how far his powers could stretch, but it always felt unrealistic when he blew out his cheeks and made one last attempt to run it off. Ronaldo had been back on the pitch for three minutes when he finally conceded defeat, raised his hand and collapsed to the ground for the third occasion, this time removing his captain’s armband.

The tears quickly followed and, for once, the sport’s ultimate showman did not want the crowd’s acclaim. He might not even have noticed in his desolation but it was a long, sympathetic ovation: a crowd not only recognising genuine greatness but that this was no way for a player of that magnitude to be removed from the occasion.

Nani took over as captain but Portugal were shorn of their most important player and Ronaldo’s absence meant being even more dependent on a system whereby all four of their midfielders would routinely drop back into defence when the team did not have the ball.

France had put them under considerable pressure from the start with Payet and Moussa Sissoko given the licence to roam, Antoine Griezmann picking up space and Paul Pogba frequently galloping forward with that long, leggy stride. Yet it was difficult for les Bleus to navigate a way behind the opposition defence and Portugal were troubled only sporadically in that period, most notably when Rui Patrício’s sprawling save turned a flying header from Griezmann over the crossbar.

France needed more wit and creativity around the penalty area and Payet looked absolutely intent on showing them the way. Not everything he tried came off, but Payet played with the drive and energy that made it seem strange Didier Deschamps thought it necessary to take him off after 57 minutes.

His replacement, Kingsley Coman, has penetrative qualities of his own but the substitution prompted loud, derisive whistles from the crowd.

France had lost their early momentum, looking increasingly short of ideas and not helped a great deal by Olivier Giroud’s lack of movement in attack. A more ambitious team than Portugal might have sensed this was a good time to show more adventure. Instead, they continued to play with near-unremitting caution and were fortunate that Griezmann misdirected his header after Coman’s cross created one of the game’s few clear opportunities. Maybe, sans Ronaldo, they did not truly believe in themselves but the Portuguese conservatism was suffocating for the match as a spectacle and they had players – notably Renato Sanches and João Mário .– who would surely have benefited from letting off the handbrake.

Giroud’s only real attempt came shortly before his substitution but Patrício kept out the shot and produced an even better save in the 84th minute to turn away Sissoko’s powerful drive.

In between, Lloris clawed away Nani’s cross from beneath his crossbar and then caught Ricardo Quaresma’s follow-up effort. The game was belatedly opening up and André-Pierre Gignac, Giroud’s replacement, might have won the match in stoppage time after turning inside Pepe in the penalty area. He scuffed his shot against a post and the game moved into extra time.

Raphaël Guerreiro, Portugal’s left-back, struck the crossbar with a free-kick at the start of the second period and, a couple of minutes later, the ball was at the feet of Éder. His shot was struck with power and precision and Portugal had their glory. 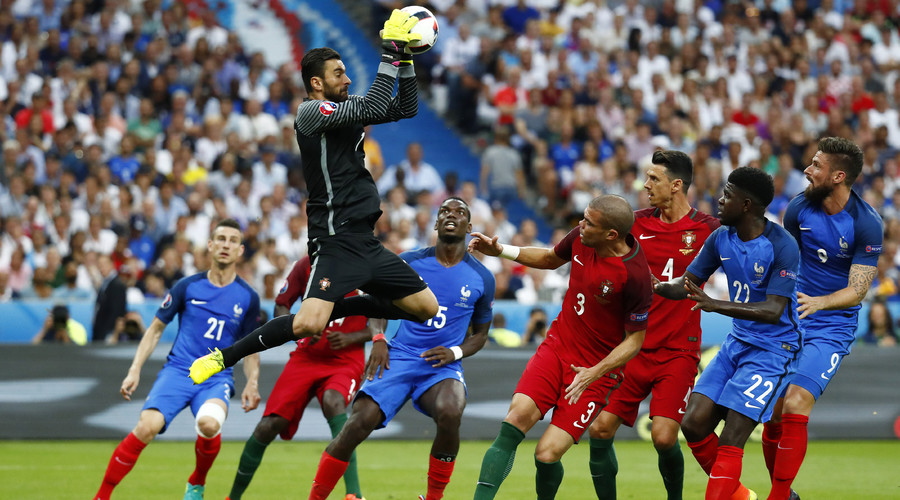 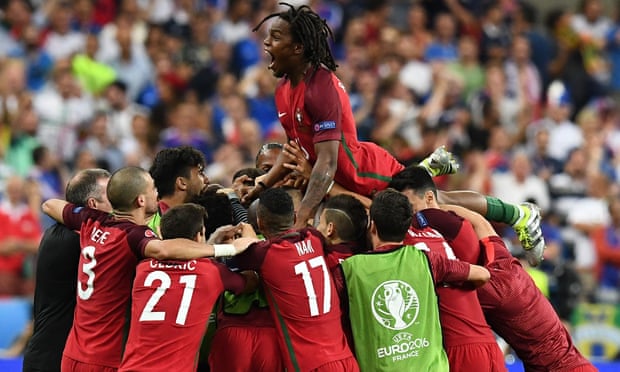