Militant group, Niger Delta Avengers, shared this press statement on its website warning rival militant group, MEND to desist from associating with them and their struggle. 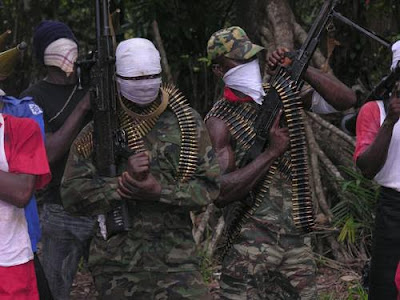 Read the statement below…

The high command of the Niger Delta Avengers (NDA) condemn in strong term the continuous efforts of Mr Ebikabowei Ben (Boyloaf), Ayiri Emami, Timipre Silva, Adams Oshiomhole and their paymasters to link and catch-in our activities to promote their political MEND that has purportedly named a team to negotiate with the Federal government.

We are not however surprised by the resurrection of the defunct MEND by these personalities because these are groups of settled Ex-fighters that they have been arming, regrouping and rebranding over the years. The people of the Niger delta knows that the likes of Timipre Silva, Boyloaf and Ayiri Emami are professional conflict merchants in the region, the only surprised entry is the outgoing Governor of Edo state Adams oshiomhole which reason is not far fetch as such he want some assistance and machineries from the criminal elements of the defunct MEND.

We are making the last appeal and warning to this so-called MEND to excuse the NDA from their criminal ways and gangs ups. Nobody can ambush the struggle, the world knows that Boyloaf and his group of bank robbers have been settled since 2009 of which he is still collecting stipends for ghost names in the presidential Amnesty program (PAP). P

lease Mr. Victor Ben (Boyloaf) if you and your criminals want to resurrect the defunct MEND and negotiate with the Government that is your business but stop using ghost names to collect money from the Presidential Amnesty program. That is our only advise and remember we know all your activities.

We once again, restate that we are not going to be part of any dialogue and peace that will achieve only “The peace of our time” what the NDA want is Peace with honour which will enter the genuine framework in setting up the short , medium and long term action plan to the restoration of the essence of quality human life in the Niger Delta. Brig. Gen Mudoch Agbinibo Spokesperson