Peter Zoutenbier, Jack Couranz and Mark Gabbedy are the three Australians kidnapped in Calabar, their families have confirmed. The fourth Mr Coot managed to escape.

Mark Gabbedy, who is understood to originally be from Tasmania but had worked in Western Australia. He had been working in Nigeria for the past 15 months as a project manager. Engineer Mr Couranz from Perth studied at Curtin University and had been with Macmahon since 2012. 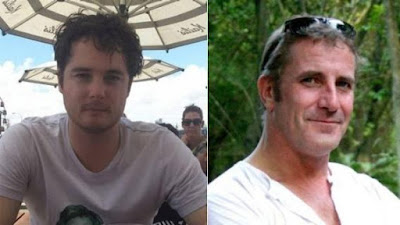 Australian Foreign Affairs Minister Julie Bishop on Friday morning said the priority for the government was to protect the lives of the hostages and that limited details about the situation would be released.
Prime Minister Malcolm Turnbull said the Australian high commissioner was on the scene and officials were working with local authorities “at the highest levels”.
The workers, employed by Perth-based engineering company Macmahon, were attacked and kidnappedon Wednesday along with four others; a Newzealander, a Nigerian, and two South African nationals, by armed gunmen who set upon their four-car convoy.
“A very intense search is on, with more patrol and surveillance teams dispatched to the rescue,” Cross River Police Commissioner Jimoh Ozi-Obeh.
The family of Peter Zoutenbier said they were shocked by what had happened.
Mr Zoutenbier’s sister-in-law Tracy Zoutenbier said it was a “real concern” the group of kidnappers had already killed someone.
“Usually that doesn’t happen, so that’s sticking in our heads at the moment,” Mrs Zoutenbier told News Corp Australia. “That’s a real worry. They’ve already been very violent. We just want to do everything we can to get these guys home safe to all their families.”
Speaking from her Zilzie home, near Rockhampton on the state’s central coast, Mrs Zoutenbier said the family were expecting to talk with the Department of Foreign Affairs.
“There’s still a lot of shock, and we don’t know a lot at the moment,” Mrs Zoutenbier said. She explained it was still “very raw” for the family, including Mr Zoutenbier’s wife and grown children whom remained in Queensland.
“It’s like you’re in a movie at the moment,” Mrs Zoutenbier said. “It’s a bit hard to take in. It’s a shock. I think it’ll take a few days before it all sinks in. We’re just all rallying together”