The Ahmed Makarfi led caretaker committee of PDP has called on the Inspector General of Police, Idris Ibrahim, to immediately arrest the former Chairman of the party, Ali Modu Sheriff. A statement signed by the committee’s spokesperson, Dayo Adeyeye, says the party is shocked at the flagrant disobedience of court orders sacking him from office. 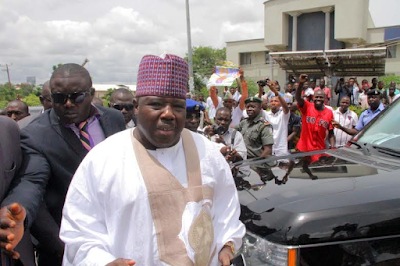 The statement in part reads

“We are shocked at the attitude of the former national chairman of our great party, Senator Ali Modu Sheriff who has become an authority in the country with flagrant disobedience of the Nigerian constitution, the Electoral Act and the PDP constitution without being arrested or detained by security agencies. Is he above the law? If we may ask”. Justice Abdullah Mohammed Liman’s judgment on Monday was superior to all other court rulings, ex-parte orders or interlocutory injunctions procured by Senator Sheriff and his co-travellers, adding that his reliance on Justice Okon Abang’s ruling of June 30 was an attempt to confuse unsuspecting members of the public as he had done in previous times. You will recall that Senator Sheriff in collaboration with some APC governors and members invaded our party secretariat on Monday June 13, 2016 laying claims to a non-existing court order; and he has started again after a competent court issued a judgment upholding the decision of our national convention in Port Harcourt, Rivers state which constituted the PDP national caretaker committee to pilot the affairs of the party for 90 days, and to conduct another convention that will elect new officers of the party. Following this, we are calling on the police to do the needful by arresting Senator Ali Modu Sheriff, his co-travellers and Hon Matthew Iduoriyekemwen for disobeying court judgment”.