News: Pastor and his wife arrested for sexually assaulting a minor

A pastor, 47 year old James S. Jackson and his wife , Valerie Jackson have been arrested and put in jail on sex-related charges after a teenager revealed to investigators with the Palm Beach County Sheriff’s Office that she had had years of “sexual sessions” with the couple. 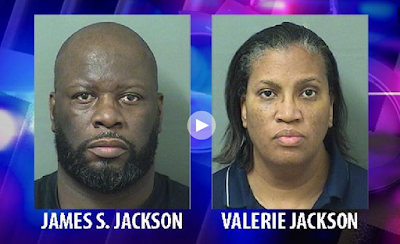 The teenager who is now 15 and whose name has not been revealed because of the sensitivity of the case and her age, told detectives with the Child Protection Team that James Jackson first started abusing her sexually when she was only 11 years old. She said he groomed her by showing her movies which turned sexual.

She said James Jackson then started to expose himself to her and that during one session, he made her perform oral sex on him while teaching her how to put on a condom. She also said Jackson performed oral sex on her when she was only 12 years old.

Authorities said the girl’s older sister also went through the same thing with Jackson which started when she was 17. She said she had Jackson’s daily “sessions” of baths and sexual intercourse until Nov. 2013 when she turned 22.

According to the probable cause affidavits filed against both suspects, both girls said Jackson’s wife, Valerie Jackson, knew of the sexual assaults and that on one occasion, she taught the girls how to get Jackson aroused.

According to police reports Jackson works at Positive Habitat for Aspiring Teens. An organization which helps teenagers transition to adults in a positive environment.

James Jackson, has been arrested and is facing sexual battery on a 12-year-old under 18, battery over 18 causing a person under 18 to have contact with body fluid, possession of photographs of the sexual performance of a child, and selling or distributing obscene material to a minor.