In today’s court hearing at Pretoria High Court, athlete Oscar Pistorius stunned everyone when he removed his prosthetic limbs and walked round the courtroom in a desperate emotional bid by him and his defense team to prove to the Judge that he didn’t intentionally murder ex-girlfriend Reeva Steenkamp in 2013. 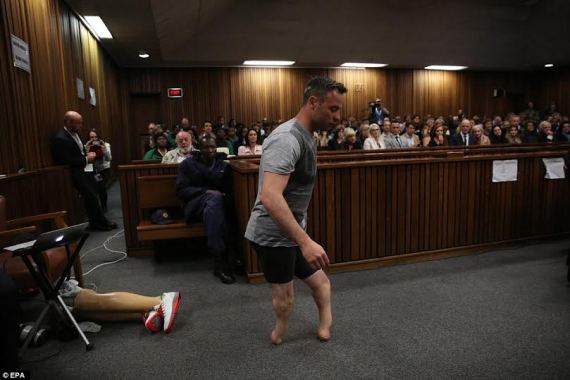 The South African runner was asked to take off his artificial legs by his defence attorney Barry Roux who said it will be “embarrassing” for his client. 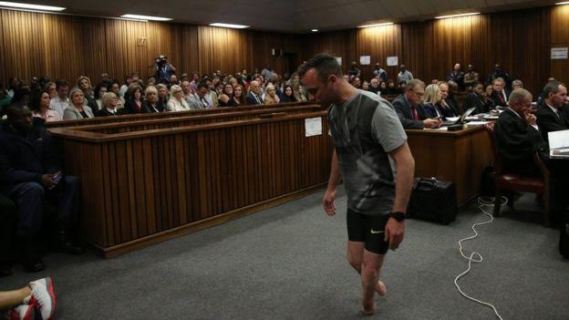 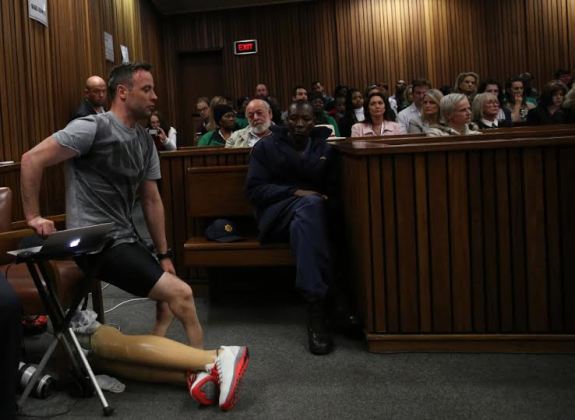 The weeping athlete removed his prostheses and began to walk in court where he appeared to be in pain and struggled to maintain his balance. He held onto a desk for support as Mr Roux pointed at him and said this was a man who was frightened by a noise at 3am. 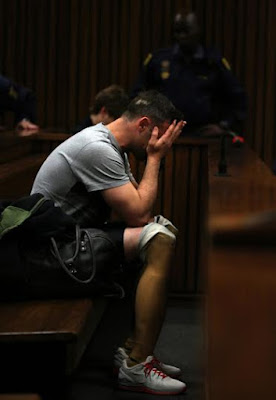 His t-shirt wet with sweat and his red eyes filled with tears, Pistorius paused at the side of the court to remove his prosthetic limbs in the full view of the packed court as his defense counsel argued that he was too weak emotionally to serve a prison sentence .
”We don’t have to be psychologists” to see Pistorius is a broken man,Defense lawyer Roux tells the Judge.
Roux points out that Pistorius’ original planned release from prison – approved by the parole board – was delayed after a government minister intervened. This has not happened to anyone else, he says. Why wait until that last minute to intervene? That decision could have been made weeks earlier.
‘No other accused has ever had to endure this level of publicity, misinformation and character assassination.’ Defence counsel Roux said in quotes gotten from Guardian UK.
‘This case has nothing to do with gender violence.’
Roux THEN calls Pistorius forward. He tells the court this will be embarrassing for his client.
He asks a weeping Pistorius to remove his prostheses and stand on his stumps in front of the court. He does so slowly, then walks haltingly. He appears to be in pain and struggles to retain his balance. He holds on to a desk for support.
His doctor moves forward to support him as he stumbles.
Roux points to him, saying ‘this is the man who was frightened by a noise at 3am. This is who is being sentenced.’
‘I don’t want to overplay vulnerability, that’s not what I want to do. I don’t want to overplay disability. But the time has come that we must just look with different eyes, at least with unbiased eyes.’
‘It doesn’t mean because he’s vulnerable that he can do what he likes. That’s not what we say.
‘But when we’re entering the field of sentencing, look at that man’s conduct … Please let’s understand … who is this man that you must sentence?’
‘He desperately does not want to hide behind fame … He wants to be treated like someone unknown, someone who has done wrong and must be punished.’
‘Punishment is not meant to break the defendant … The accused does not fall into the category of offender who should be removed from society.’
‘There is no purpose served.’
‘The sentence needs to be appropriate to the individual,’ defence counsel says.
‘The court needs to look for opportunities for rehabilitation. An excessive punishment could have the opposite effect’