The Senate this morning resolved to summon the Minister of Foreign Affairs, Geoffrey Onyeama and the Secretary to the Government of the Federation, Babachir David Lawal, to appear before it over what they described as irregularities in the ambassadorial nominees list forwarded to the National Assembly for screening by President Buhari on June 9th. 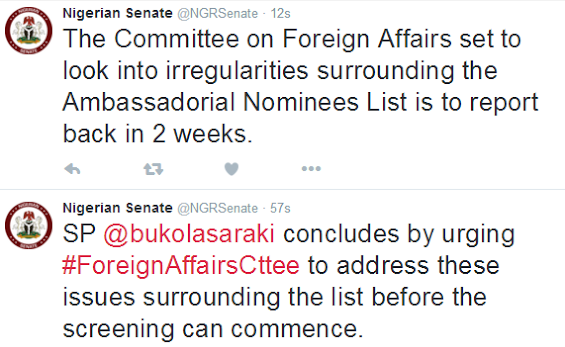 At the plenary today, Senator Joshua Dariye moved that the Minister of Foreign Affairs be summoned to explain the irregularities surrounding the Ambassadorial nominees List. Also speaking, Senator Sunday Ogbuoji said the Ambassadorial nominees list had Assistant Directors on it while Directors who are qualified didn’t make it. Senator Shehu Sani added that many states have complained that they have no representative in the ministerial list.