A Las Vegas woman, Phoukeo Dej-Oudom, 35, was seen running and screaming for help as her gun-wielding estranged husband chased her from their home to two store parking lots, authorities said Thursday.

Court records show that Dej-Oudom filed for divorce May 25 from her husband, Jason Hagan Dej-Odoum after almost 16 years of marriage. The couple were married in July 2000 in Columbus, Ohio.

The document asked a judge to consider domestic violence when considering custody but didn’t provide any detail. It also noted the involvement of Clark County Child Protective Services.

However, no one appeared for the June 22 hearing in the divorce case.

On Wednesday night, a driver said he spotted Phoukeo Dej-Oudom waving her hands and screaming for help in the street near her home and picked her up in order to help her. However, her estranged husband, Jason Hagan Dej-Odoum chased them to a CVS drug store two blocks away, where he cut off the driver and dragged his wife into his car at gunpoint.

As he drove off, his wife partially hung out the window and eventually managed to escape from him and started running again.

Witnesses said they saw Jason Hagan Dej-Odoum chasing her in his car as she ran toward a Walgreens store about a half mile away. 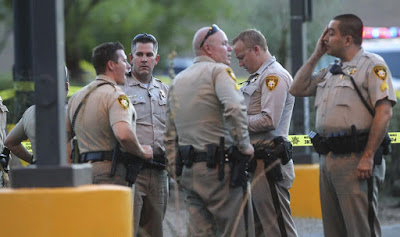 One of the witnesses rushed to the scene to help the woman but she was already dead, with least one gunshot wound to the head, McGrath said.

Her estranged husband, Jason Hagan Dej-Odoum fled the scene immediately and ran back to the apartment. A relative called police about 30 minutes later saying that Jason was at the apartment and suicidal.

A SWAT team responded to the apartment and found the bodies of the father, Jason and his three children ages 9 to 15 in a bedroom.

After the man gunned down his wife, he killed their children at their apartment before shooting himself, police said. Homicide detectives are investigating what drove him to kill his family.
Authorities couldn’t tell for sure if he killed the children before or after he killed his wife.

The Clark County coroner’s office identified the couple’s children as 15-year-old daughter, Dalavanh Ariel Dej-Oudom, and sons, Xonajuk J.J. Dej-Oudom, 14, and Anhurak Jason Dej-Oudom, 9. The youngest child died of a gunshot wound to the head. The coroner hasn’t released the cause of death for the mother or the other children.

“It’s really hard to understand how this could happen, how somebody could do that to children,” police Lt. Dan McGrath said.