The Lagos State Government on Monday warned residents to keep off the Ogun River, near the Kara Cattle Market which was recently blocked by vegetation, saying that the river could open up at any time with dire consequences. 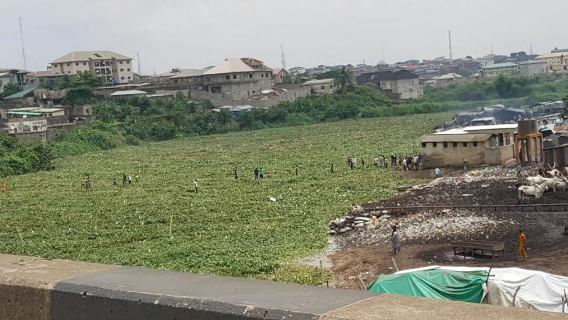 Last weekend, the river was taken over by vegetation, caused by a heavy storm, which created a compacted layer over the river. Residents in the area were stunned by the incident and turned the area to a tourist site of some sort, with some residents seen walking on the blocked river and taking pictures. But the State Government in a statement signed by the Commissioner for Waterfront Infrastructure Development, Engr. Adebowale Akinsanya, said it was dangerous for residents to besiege the dry area as the flow of the river was still active beneath.

“It is important to notify the public that have been worried about the environmental consequence of a dried up river to note that the flow of the river is still active beneath the vegetation and the situation is been evaluated. However, because of the compacted nature of the vegetation residents and onlookers are of the erroneous belief that the river has suddenly dried up and can walk across the vegetation.

“A lot of people that have turned the place to a tourist destination are unaware of the danger lying ahead. It’s important for the public to be aware that the vegetation can give away at any time and can lead to a potential disastrous situation,” he said.

He also advised residents to go about their lawful business and as well desist from the habit of parking on the bridge to take pictures, which according to him was causing serious traffic, hardship and loss of business time to other commuters on the road.

“Carrying out any activities on the blockage of this river is unsafe, dangerous and disastrous. Please keep off,” Akinsanya warned.