The Imo state police command have arrested one Rev. Fr. John Ogoekwe of the CKC, Uvuru, Aboh Mbaise and three other priests and also shut down the Catholic cathedral in Ahiara, Mbaise, Imo State, following a violent protest allegedly led by the arrested priests. 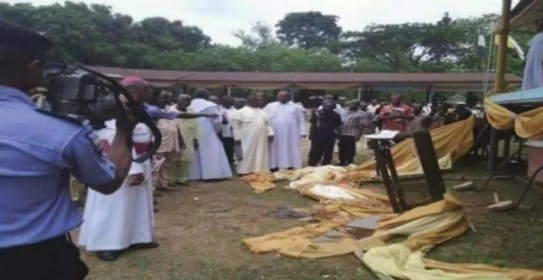 The protest which took place last Saturday July 2nd, saw a Divisional Police Officer (DPO), of Ahiazu division, Danjuma Ragga Ben shot on the leg and hand. The priest and some of his members were protesting over who should be made the Bishop of the Catholic Diocese of the area.

Peace had eluded the diocese for about three years now since Pope Francis appointed Bishop Peter Opkaleke from Anambra state as the bishop of the diocese. The priests in the area and their members had protested Okpaleke’s appointment, insisting that a priest from their state should be appointed into such leadership position.  To resolve the impasse, a Vicar General, Rev. Fr. Clement Ebi, was appointed to function in the diocese as a bishop until the matter is full resolved.

Trouble started on Saturday July 2nd when the Vicar General decided to host the Catholic Women Organization of the diocese at St. Roses Catholic Church, Ezinihitte. This apparently did not go down well with some of the youths who came out in their numbers and barricaded the streets and Cathedral, setting fire and carrying leaves and placards. During the protest, the DPO was shot in the leg and hand.

A statement by the spokesperson of the state police command, Andrew Enwerem, said twelve people have so far been arrested in connection with the protest.

“Twelve suspects, including four Rev. Fathers, were eventually arrested and are been interrogated. All those involved in the shooting of the DPO will be fished out and prosecuted. The Commissioner of police has therefore, ordered the Cathedral to remain under lock and key to avoid further violence.”