Fifteen people were killed yesterday, June 19, in a multiple auto accidents involving a truck, a fuel tanker and a commercial bus on Lagos-Ibadan expressway.
The accident, which occurred  at the Fidiwo-Ajebo, Ogun State stretch of the Lagos-Ibadan Expressway, left 14 passengers and driver of the commercial bus dead. *viewer discretion advised* 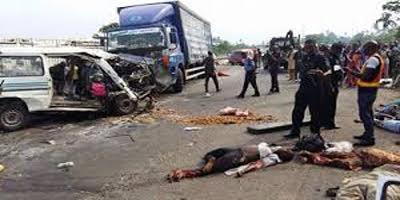 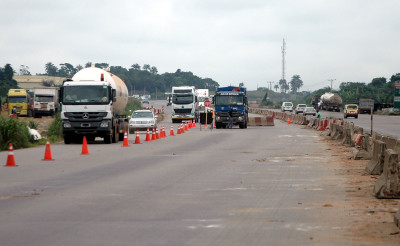 The truck was marked AJG 40 XA and fuel tanker with registration number RAN 571 XA. The passenger bus was marked (LAGOS) AGL 373 XR. It was learnt that the accident occurred, when the driver of the fuel-laden truck moving in the direction of Ibadan, Oyo State, attempted to overtake another truck at a road diversion point.
The driver lost control of the truck and veered off, crashing into the commercial bus, which was coming in the opposite direction. As at 2:30pm, operatives of Ogun State Traffic Compliance and Enforcement Agency (TRACE), the police and the Federal Road Safety Corp (FRSC) were seen trying to pull victims out of the mangled bus.
The Sector Commander, Ogun State Command of the FRSC, Adetunji Adegoke, in a text message to The Nation, stated that 15 persons  – six females and nine males, died in the accident. One person sustained injuries.
Adegoke blamed the cause of the accident on “wrongful overtaking”, adding that the injured was taken to the Olabisi Onabanjo University Teaching Hospital (OOUTH), Sagamu while the dead were taken to FOS Mortuary, Ipara, near Sagamu.
He advised “drivers to obey road traffic rules and regulations, avoid wrong overtaking, observe speed limit as well as shun the use of expired/tokunbo tyres to avoid accidents on the roads”