Operatives of the Economic and Financial Crimes Commission (EFCC) today Tuesday June 14th stormed the Lagos residences of former Minister of State for Defence, Musiliu Obanikoro, taking away cars and other valuables. 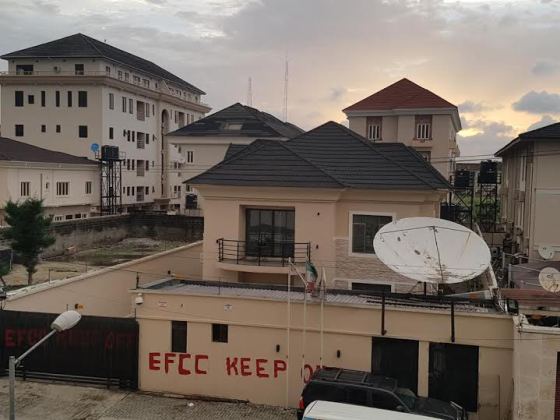 The two homes raided were the former minister’s private residence at Park View Estate in Ikoyi and the house near Banana Island, also in Ikoyi where his two sons, Jide and Gbolahan live with their families.

The antigraft agents took along with them vehicles, wristwatches and other personal effects of the former minister and his sons, who are all in the United States.

“Officials of the Economic and Financial Crimes Commission (EFCC) Tuesday in their characteristic Gestapo like manner invaded Senator Obanikoro’s houses in Ikoyi with unnecessary intimidation and harassment of occupants who are majorly innocent kids, teenagers, his wife and daughter in-laws not without carting away cars, wristwatches and other valuables. This is against the backdrop of the fact that the anti- graft agency has never invited him nor his sons for questioning beyond the tirades and allegations they have been propagating using the media spaces. We are using this medium to draw attention of all Nigerians to yet another infringement on the fundamental and inalienable rights of the Obanikoro family. Lovers of freedom should not wait until our democracy is put at irreversible damage. The list of human rights violations and political persecution has reached an alarming rate. We see this as an affront and a further show of shame and ignominy of this present administration hell bent in politically persecuting its perceived opponents in other to stoop them and rubbish their hard earned reputation of untainted public services. To our chagrin, the vehicles driven away were cars and trucks bought since 2006 and thereabouts when Senator Obanikoro served as an Ambassador in Ghana among others which obviously had no bearing with the purported investigation they are supposedly carrying out.

We condemn in strong terms the brigandage and the idea of Inflicting trauma on innocent dependants and violating their privacies without recourse to the rule of Law. Senator Obanikoro has consulted with his Lawyers and are prepared to meet them in court to stop this intrusions and persecution,”.

Spokesman for the EFCC, Wilson Uwajeren, confirmed the raid of Obanikoro’s home. He said

“I can tell you that no one was harassed in the course of the search and that it is part of ongoing investigation on the man. Our operatives who went there conducted their affairs in best practices and took some vehicles away. I cannot immediately give inventory on the things that were carted away but that will be made known in due time. I do not think we need any permission from the man to do our job. Full details will be disclosed when we get there,” he said.