Presumptive Republican Presidential nominee Donald Trump told NBC’s “Meet the Press” on Sunday that he will win the U.S Presidential election in November ‘one way or the other’. 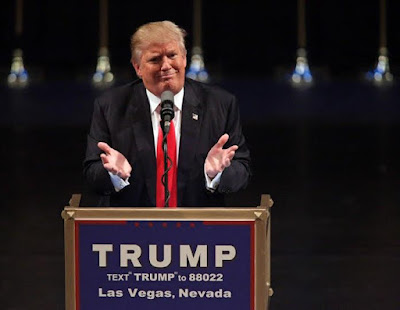 The Billionaire businessman said everyone should forget the polls, forget the short list of important endorsements and forget the GOP infighting, that he’ll win the elections.

“We’re going to go onto a great victory. It would be nice if the Republicans stuck together,”
“I’m a different kind of a candidate, I think that I win either way. I can win one way or the other,” he said.
When asked specifically of the reports regarding a mutiny of the Republican delegates, Trump dismissed the chatter at once.
“Number one, they can’t do it legally. Number two, I worked for one year and we won all of those delegates. And, you know, I guess I’m at almost 1,600,” he said, referring to the 1,542 delegates he’s secured. To win the nomination on the first ballot at the Republican National Convention next month and avoid a contested convention, Trump needs only 1,237 delegates.
Prominent Republican, House Speaker Paul Ryan (R-Wis.), said Sunday that he would stand by Trump, even if it was out of obligation in order not to create party divisions.
“I feel like I have certain responsibilities, as not just Congressman Paul Ryan from the first district of Wisconsin, but as Speaker of the House. And imagine the Speaker of the House not supporting the duly elected nominee of our party, therefore creating a chasm in our party to split us in half, which basically helps deny us the White House, and strong majorities in Congress,” Ryan said on the same NBC program.
“Now … if something is done and said that I don’t agree with that I think puts a bad label on conservatism, then I’m going to speak out on it as I have, as I will continue to do, and I hope I don’t have to keep doing,” added Ryan.