Authorities in Bangladesh have arrested 8,559 people — including 119 suspected Islamist militants — during mass raids over the last three days, a police spokesman said Monday.

The arrests come as part of a crackdown on extremism after a spate of brutal murders in recent months.

On Saturday, a police statement said that most of the arrested suspected militants were members of Jama’atul Mujahedin Bangladesh (JMB), a banned Islamist group.
The JMB has been blamed for bomb attacks and members of the group have been detained in relation to the recent murder of a Hindu priest.
Last week, the wife of a senior police officer who had led high-profile operations against the JMB was stabbed and shot to death while taking her to son to catch his school bus.
Police seized arms, ammunition, other lethal weapons as well as over 1,500 motorbikes during the raids.
An officially secular but Muslim majority nation, Bangladesh has recently seen a surge of targeted killings — blamed on Islamist radicals — that have claimed the lives of secularists,religious minorities and gay activists.
According to Marcia Bernicat, U.S. ambassador to Bangladesh, there have been at least 35 such attacks carried out in the span of 14 months. Of those, 23 have been claimed by an Islamist terror group. 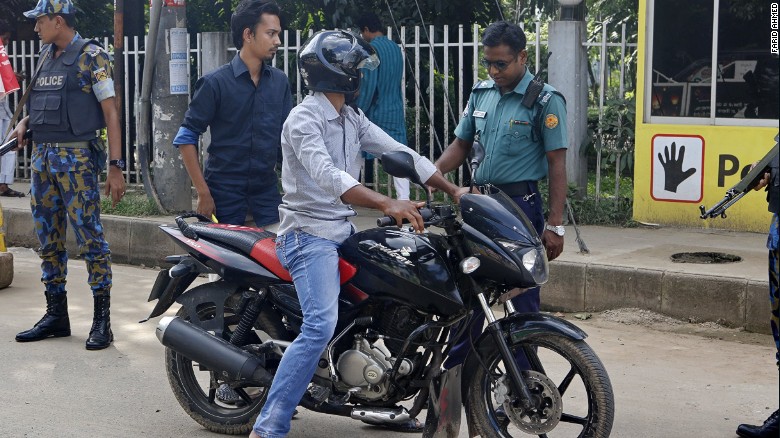 The government has been criticized for not doing more to respond to the killings.
On Saturday, Bangladesh’s Prime Minister Sheikh Hasina said she wanted to bring all the perpetrators to justice.
“Where will the criminals hide? Each and every killer would be brought to book as we have done after 2015 mayhem,” Hasina said……
A man on a motorcycle is stopped at a police check-post in Gulshan in the capital of Dhaka.
The Bangladeshi government accuses the opposition party Bangladesh Nationalist Party (BNP) and other Islamic fundamentalist groups for the attacks.
“All terror in Bangladesh for the last four years, the answer is very simple,” Information Minister Hasanul Haq Inu told CNN in a recent interview.
“The producer is BNP, the director is Jamaat e Islami, and the small actors on the ground are variants of ABT (Ansarullah Bangla Team), JMB, and certain other militant Islamic networks.”
BNP’s Secretary General Mirza Fakhrul Islam Alamgir told CNN Sunday that the government raid is designed to detain the leaders and workers of his party.