Over the weekend news leaked that Arsenal had submitted a £20 million offer for Jamie Vardy with Premier League winning sensation team Leicester City, a figure that matched the attacker’s exit clause in his contract. 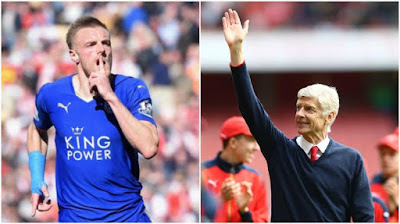 Leicester City are powerless at the moment to keep Jamie Vardy as his release clause has been activated by Arsenal. They have pleaded with his agent and the player to reconsider staying with Leicester for one more season.

Arsenal has offered Vardy a four year contract and he’s supposed to tell Leicester today if he will take up Arsenal’s offer or not.
The Foxes must now decide whether to match Arsenal’s contract offer, which is in excess of £100,000-a-week
“I have been told that Jamie wants to join us and it’s very good news for us – I think we can be complimentary,” said Giroud to the BBC. “He’s a fantastic player, so it’s good news for us.”
Asked if Vardy’s arrival would mean a change in formation from Wenger’s usual 4-2-3-1 system, Giroud joked: “Obviously 4-4-2. As I said in the past I am happy with competition. We have always had fantastic strikers at Arsenal and I want the best for this club. Hopefully he is going to help us win this title.